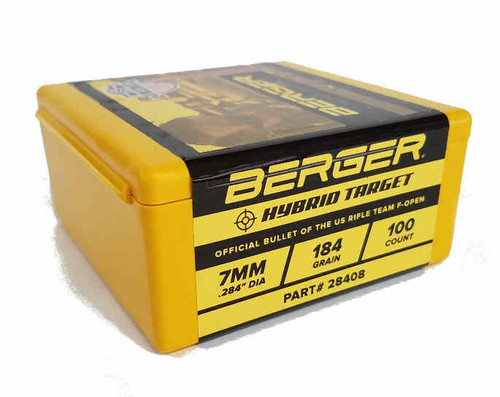 Our Hybrid design blends the best of both worlds by incorporating two different shapes within the nose. As the bearing surface ends, a tangent ogive begins. This tangent section of the ogive results in the bullet being much less sensitive to seating depth. As you move forward along the tangent portion, the shape changes into a secant ogive (the shape used on the VLD bullets). This shape is very efficient in the wind and is why the VLD became so popular. The key to all this is not just the combining of these two shapes but also the partnership between the ballistician and the bullet maker. Berger’s Chief Ballistician, Bryan Litz uses his expertise to combine the appropriate shapes for optimum performance.  Bryan designed the new 184gr F-Open Hybrid to be slightly heavier, slightly longer and have a more aggressive ogive shape; giving it a ballistic advantage to our existing 7mm 180gr Hybrid and VLD Target bullet designs.

The US F-Open Rifle Team tested these bullets thoroughly to make sure that they performed as well on target as they did in theory. The results are in, and we are all pleased to say that this bullet will be the official 7mm bullet of choice for the US F-Open team. “The United States Rifle Team 2021 F-Open is extremely excited about the release of the new Berger 184gr F-Open Hybrid. Many members have tested the prototype bullets with outstanding success,” says Dan Bramley, Team Captain.