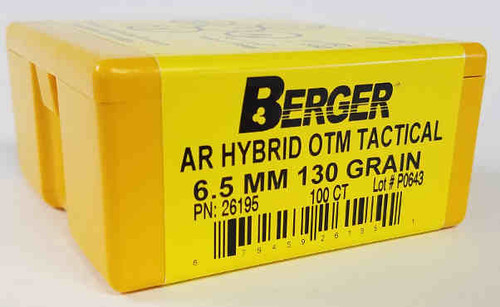 Our Tactical bullet line bridges the gap between functionality and the highest possible ballistic performance. Each Tactical bullet is designed with a specific cartridge in mind that is used most commonly in tactical competition and against bad guys. Bryan Litz analyzed the cases and the rifles shooting that case. He then designed the bullets so that they are functional in these rifle’s magazines while still being capable of superior ballistic performance. Additionally, these bullets are made with thicker jackets allowing them to perform reliably under the most abusive conditions found in tactical competition, tactical situations and in combat. The ogive design for these bullets are optimized for their specific application and rifle, which means some have a Hybrid nose while others have a pure tangent ogive. The Hybrid design incorporates two shapes that work together to produce the best trajectory performance while at the same time they do not have to be tuned to a specific seating depth like the VLD bullets. Tactical bullets will be successful at either magazine feedable lengths or loaded long for single shot firing situations which can allow for more powder capacity and higher velocities. These bullets truly give the Tactical user the best possible results for whatever situation in which they find themselves.