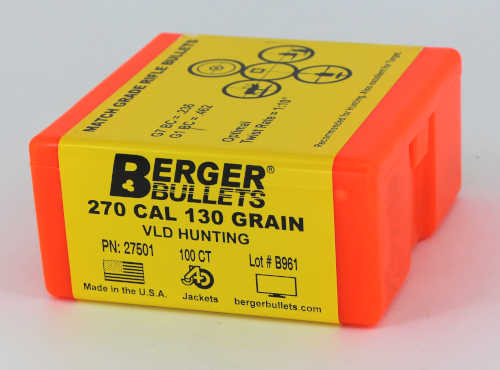 The Hunting bullet line is proving to be the most lethal big game hunting bullets available. All of our Hunting bullets are made in the VLD or Hybrid designs. These designs incorporate a sharp nose and slightly thinner jacket that allows the bullet to penetrate 2” to 3” before it starts to expand. After the bullet starts to expand it will shed 40% to 85% of its weight as shrapnel into the surrounding tissue (internal organ). The combination between the shrapnel and the hydrostatic shock produces a massive wound cavity within the vital area (internal organs) that will be 13” to 15” long. This massive wound cavity results in the animal dropping fast since most go into shock after such a tremendous blow. Those animals that don’t go down immediately will soon succumb to blood pressure loss and/or organ failure producing a quick ethical kill.

Our bullets don’t poke through like an arrow (high weight retention, deep penetration bullets) but instead dump their energy where it is most effective, inside the animal. Using the Berger VLD will result in an animal that goes down fast so you can enjoy the results of your hunt without having to track the wounded animal after the shot. You owe it to yourself to see how accurate and deadly the Berger Hunting VLD will be on your next hunt.

The VLD (Very Low Drag) bullet design was born from a request made by the US 300 Meter Shooting Team. This successful bullet design soon found its way into all target competitions. Soon, hunters began to pick up the bullet as well once they realized the benefits to accuracy and the effectiveness of Berger’s hydrostatic shock.

The VLD bullet design is a combination of two very specific features. The first is a boat tail which is common on long and heavy bullets. The second and most important design feature is the long secant ogive. It is this ogive shape that allows the bullet to experience less drag as it flies to the target. This reduced drag is how the VLD shoots flatter and is less affected by wind (less drift) than other bullets. Reduced drag also translates into higher retained velocity. These are important results if you want your bullet to help improve your accuracy by requiring less sight adjustments when conditions change.