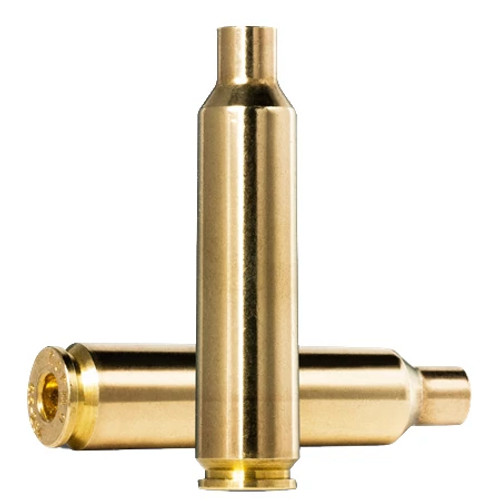 For more than 100 years, the golden rule at NORMA has been precision and quality in everything we make. NORMA brass has long been a household name for cases in a league of their own, made of the best possible raw materials with the narrowest tolerances ensuring long life and many reloads.

This wildcat was probably first made shortly after the introduction of the .284 Winchester in 1963. Due to the enormous popularity of the 6.5 mm caliber in Europe the 6.5-.284 was made into a factory round by Norma of Sweden in 2001 - only a year after they marketed the first cases for reloading. During its many years as a wildcat it gained a well-deserved reputation of being a very accurate cartridge combining a moderate recoil and muzzle blast with the outstanding long range and penetration potential of the long .264” bullets of 140 grains or more.

Most of the rifles in 6.5x.284 Norma are used for target shooting, but it is gaining popularity as a long range hunting and varmint cartridge too. The 6.5-.284 Norma will do everything the 6.5x55 Swedish will do - a 100 yards further out. Since its introduction it has been tried out on hunts for mountain game in Asia, Europe and North America. On a recent hunt in Iran the 6,5x284 Norma was tested and proved capable of making an instant kill on an Transcaspian Urial ram at a distances exceeding 350 yards. One year earlier in the Sierra Gredos range near Madrid the same thing had happened to a Spanish Ibex, who presented a broadside shot at approximately 300 yards. The relatively small diameter of the 6.5 mm bullets is fully compensated by the deep penetration these long and slender projectiles always delivers. A huge Iranian wild boar standing broadside at 80 yards was effectively killed by a 140 grain bullet that went all the way through both shoulders. The animal ran less than 30 yards before collapsing - and turned out to weigh close to 600 pounds. Whether you are a varmint hunter, sensitive to recoil or preferring a lightweight mountain rifle you’ll have to struggle hard to find a better and more versatile choice of caliber than the 6.5-.284 Norma.